On July 23rd 2019, the ceremony on preliminarily summing up the first 06-month emulation movement and embedding board of Works of greeting the 90th aniversary of Vietnam Trade Union foundation for Song Hau 1 Power Plant Project was celebrated in the Project site. 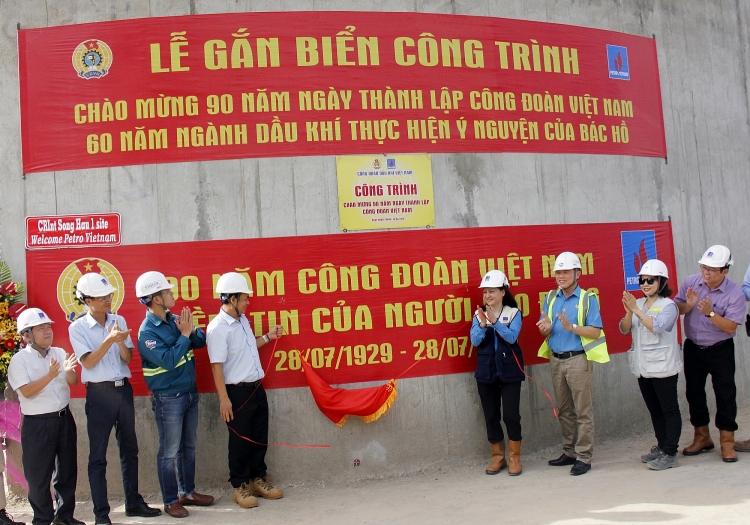 According to the report on launching emulation movement 2019 by SH1PMB Trade Union, there were 93 project items on mechanicals, electricity and construction which would be completed upon scheduled plan and targets have been agreed and committed and signed under agreements of emulation between Lilama EPC Contractor and PetroVietnam representative leader. Within the first 06 months of 2019, the completion of a number of project items have been either achieved or even beyond the scheduled milestones, especially the following three most important including turbin and generator installation of the Rotor No#1 on May 15th 2019, and that of the Rotor No#2 on June 30th 2019, and the plant chimney construction on July 30th 2019.

As a result of above achievements, Song Hau 1 Thermal Power Plant Project has so far been conducted by its effective management, synchronous execution and comprehensive co-operation among the Owner, EPC contractor and subcontractors.

Addressing the speech at the ceremony, Mr. Dao Van Thong – Chairman of LILAMA Trade Union expressed his congratulation on the remarkable achievements of Song Hau 1 Project in the first 06 months of the year 2019. He pledged that in accordance with SH1PMB Union, LILAMA Trade Union should always be in the tight co-operation and make their own best to support all parties involved in the Project to fulfill their workscope upon a determination to complete and put Song Hau 1 Thermal Power Plant into operation on scheduled time successfully.

Also at the ceremony, collectives and individuals who had excellently fulfilled their duties within the early 06-month period of emulation movement on Song Hau 1 Project site were honored to be awarded the certificate of merit from Vietnam General Confederation of Labour and PetroVietnam Trade Union. Particularly, LILAMA Trade Union also praised and awarded 08 collectives and 09 individuals of the subcontractors from Lilama subsidiary companies .