At present, a number of national important projects were still falling into dramatic circumstance after a long time of slowly carrying out or ceasing without finding any exit. Hundreds of trillion VND which had been invested in these projects was freeze and caused extreme loss due to tights and bureaucracy in state mechanism. The national economy was lack of industrial mega-projects as key, founding and motivate factors for economic growth in the future. This situation has been leveled at red alarm and need considering urgently and recovering as soon as possible. 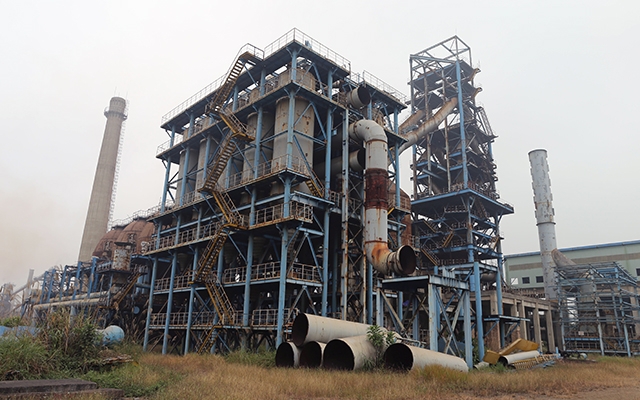 Disadvantages in all levels

According to an economic expert, TISCO-II was a project owning the most disadvantages as follow: taking longest time to tackle, having the most opposite contradiction in remedies, making the most financial loss without explanation. Until now after nearly 07 years of suspending, the question how to finding possible way out for the project resumption was still left unanswered.

The TISCO-II project was started in 2005 and officially commenced two years later with the total investment of VND 3,843 billion under EPC contract form with the main EPC contractor of China Metallurgical Group Corporation (MCC Group). However, the project initial estimation had been sunk several months later as a consequence of the regional crisis in Asia which made a sudden increase in the input material price for steel billet production far beyond from the first calculation. For example, the steel billet price which was just US 320 dollars per ton in first calculation had been then multiplied 2.5 times to over US 900 dollars per ton, crude oil unit price raised from US 80 dollars to US 140 dollars per barrel, currency exchange rate of VND to USD was from  15.800VND up to 21.000VND to a dollar, the bank interest rate was highly anchored at 21% per year, which were beyond out of the control of both TISCO and MCC and made TISCO-II performance be impossible to keep on and come to standstill for 18 months.

To deal these matters, the Ministry of Planning and Investment had directed many delegations to pay inspection visits in local provinces to seek reasons and find out remedies for a series of pending and overfunding projects to report the Government. After such reports, the Government appointed the Ministry of Instruction to issue the Circulation No. 09/2008/TT-BXD on guiding the adjustment of the Total Investment for projects of this kind. TISCO-II’s was positioned to follow one of the two ways: one way was if it was left for incompletion, the investment and managing cost should be wasted by no means, the later was if the total investment was increased, whether the project would be continued effectively? To answer this question, Vietnam National Construction Consultants Corporation-JSC (VNCC) under the Ministry of Construction’s direction had reviewed and reassessed  the TISCO-II project feasibility for 02 times and concluded that it would work effectively when the internal rate of return (IRR) maintained at 16%. The VNCC’s review was also supported by the Ministry of Finance, the Ministry of Planning & Investment, the Ministry of Construction… Therefore, the Resolution No.64/NQ-CP issued by the Government upon agreement with the Ministry of Industry & Commerce’s proposal of raising fund for TISCO-II permitted Vietnam Steel Corporation (VNSTEEL) to responsibly self-decide the total investment increase conforming into the current regulations.

However, after TISCO-II’s total investment was raised up to VND 8,100 billion from VND 3,843 billion, there appeared many other difficulties that made TISCO-II failed to resume execution from 2012, and so far TISCO had been falling into a constant depression and bearing a bund of a huge debt. According to the initial schedule, after completion for operation, TISCO-II plant should have produced 500 thousand tons of billets per year by BOF technique (Basic Oxygen Furnace) which raised TISCO’s total production up to 01 million tons per year. Since the TISCO-II was synchronously engineered and constructed, billet products should have been provided for Thai Trung Steel Rolling Mill manufacturing (a VNSTEEL’s subsidiary Thai Trung Steel Rolling JSC’s plant), which would have helped expanding production scale, saving fuel cost and promoting competitiveness for TISCO in the steel market. At that time, the TISCO-II complete plant was self-contained steel processing that would have been expected to achieve highly economic effectiveness and help creating jobs for over 4.000 labours of TISCO.

At present, Thai Trung Steel Rolling Mill had to buy billet with high price from other merchants instead which should have been received from TISCO-II plant, adding with the cost of heater for rolling, made the total production cost ranging from VND 240 billion to VND 280 billion each year. Upon TISCO’s loan agreement contract with the bank for TISCO-II, the company had to return an amount of VND 47 billion per month since January 2017, and TISCO had to use short-term capital from bank loans for repay principal and interest amounted to VND 1,333 billion from 2011 till end of 2018. There was a bitter metaphor by TISCO staff as “Each Camry has been vaporized from TISCO after every waken morning”(!?).

If the loan principal and interest per day had had a Camry from TISCO-II vaporized each day, the amount from Thai Binh 2 TPPP would have been 05 times of which 05 Camrys had vaporized per day. To take easy for readers to understand that the aggregation of total investments of twelve loss-making Industrial-Commercial “mega-projects” would just equal to that of Thai Binh 2 TPPP. This was a national important project which PETROVIETNAM (PVN) was the Owner and Petro Vietnam Construction J.S Corporation the EPC contractor with the total investment of VND 41,399 billion and the capital structure proportion of 70% loans and 30% owner’s. Thai Binh 2 TPPP was composed of two generators with the total capacity of 1,200 MW that would produce approximate 7.2 billion kW per hour each year for the national power network when it was put into operation.

According Mr. Nguyen Ngoc Hai - Head of Petro Vietnam Thai Binh 2 Power Project Management Board (PV Thai Binh 2 PPMB), the project was launched by the end of 2011, of which the Unit#1 was expected to complete for operation in 2014 and the Unit #2 at the beginning of 2015. However, during the process, PVC’s violations had occurred and caused delay in schedule of Thai Binh 2 TPPP (these violations were then inspected and disciplined by the functioning authorities). At the present, the general schedule gained 84.31%; the disbursement after tax reached USD 996.9 millions and VND 11,639 billions (totally amounting VND 33,243.26, billion and equivalent to79.53% of the total investment). Until now, when all legal problems had basically resolved and recovered, the disbursement resumption was accepted by the international banks with an amount of USD 326 millions, but due to the expired date of loans was on September 9th 2018, the project once again fell into impasse as the disbursement extension was not agreed by the authoritative levels. Meanwhile, the credits granted by domestic banks were still under consideration and had not been accepted yet beyond credit limit as Thai Binh 2 TPPP was not involved in the issuing list of projects of credit extension.

Chairman of Vietnam Energy Association (VEA) Tran Viet Ngai shared: “Thai Binh 2 TPPP was delayed in schedule because of initially previous violations. Despite violating individuals’ liability was disciplined, the remaining was comprehensively unresolved which pushed the project’s disbursement into stuck. In one hand, there was a fact that the Commission for the Management of State Capital at Enterprises (CMSC) is a representative agency for state capital owning without holding money; the Ministry of Industry & Commerce is a managing agency to the state-onwned enterprise without permission of disbursement; while the enterprise could arrange capital successfully but owns no rights to self-decide. On the other hand, the state mechanism is anfractuous and impossible for the enterprise and the project to breakthrough when needed, therefore the enterprise finally bear the consequences itself without anyone to be blamed for”.

As the matter of fact, PVC and other subcontractors had not been affordable to keep Thai Binh 2 TPPP going on. Because of long lasting duration, there had been many difficulties and risks arising within the project execution period like expired date of guarantee for materials and equipments, inability to apply for more credit loans,… that laid the Owner and EPC contractor under high pressure. The worriest concern was that a number of the project leaders and staffs from both the Owner and EPC contractor who were competent and experienced currently not only showed their expression of alarm and depression but also did not want to held assignments, even requested to move away for another work. Therefore, the situation on the Thai Binh 2 TPPP management with existing difficulties would become harder and harder for the next coming time. One of the Thai Binh 2 PMB leaders revealed that some key managing staffs from PVC’s project board had gone off work, it did the same or even more with the Owner PMB. For example, 04 deputy managers from Technology & Equipments Department, 03 all of 01 manager and 02 deputy managers from Quality Management Department had left and the Board forced to appoint a staff as an acting manager,…

As the time before, the quantity of labour resource on Thai Binh 2 project site had always been from 800 to 1,000 people, but at this time it reduced to only 400 ones. The delay in schedule with no financial disbursement for payment to contractors pushed Thai Binh 2 TPPP into an almost paralysis. If the situation was kept lasting long and the Tet holiday coming nearer and nearer with no source of money to make even a minimum payment for labourers’ salary,  it should be “the last straw” to cause labourers not to have enough belief to stay and work on site as a result of many months of salary arrears.

Similarly, the Song Hau 1 TPPP was commenced in 2015 with the total investment of over VND 43,000 billion which was expected to operate commercially both the Unit#1 and the Unit#2 in 2019. However, so far the total schedule had just gained 81% of the total plan due to nearly-2-year delay. More particularly, the disbursement for Song Hau 1TPPP was reached at approximate VND 3,074 billion, equivalent to 60.5% of the total plan; the year investment estimation was gained with VND 3,378.20 billion equal to 66.48% of the whole year plan within 2019. It was worth mentioning that although the Song Hau 1 TPPP is one of the first projects applying specific mechanism following to the Decision No. 2414/QÐ-TTg on adjusting list and schedule of some particular power projects and regulations on specific policies applying for urgent power projects period 2013 – 2020, there appeared many difficulties during the organization and implementation leading to ‘mis-tempo’ of the project schedule.

At present, payments of constructing and installing work were only made temporarily in order to help solving lack of finance for subcontractors. Although the Song Hau 1 TPPP was not the first thermal power plant project, there were many phases and stages of the plant not to be updated in the national standards system which had been invisibly giving a hard work in defining and adjusting unit-price calculation of work items. This led to difficulties in completion of documentary, taking over and final payment, especially in some packages that the payment in full still could not be made even 03 years after finishing.

Posted by Correspondents on economic issues