The deep and wide influence of Covid-19 pandemic on many nations and fields have been unexpectingly on-going. As a country with deep integration in the world economy, Vietnam was also suffering from the impacts. Generally saying, we have initially controlled its spreading, but the consequences were still causing interruptions in fields and industries, especially in production, supply, demand and circulation of goods and commodity in import and export, labour, airways, education… However, the domestic enterprises have eventually recovered from difficulties, to adapt the situation and find more way-outs for development.

To complete projects on schedule with great efforts

As an important national project in the Southern Vietnam, the Song Hau 1 Thermal Power Plant Project performed by LILAMA as the EPC Contractor, has been completed by 95.78% the total work volume of installation. At present, the following works would be carried out including: coal importing and firing, adjusting the design capacity of the units, optimizing the whole plant system operation, trusting runing and handing over the Client for commercial operation on schedule. 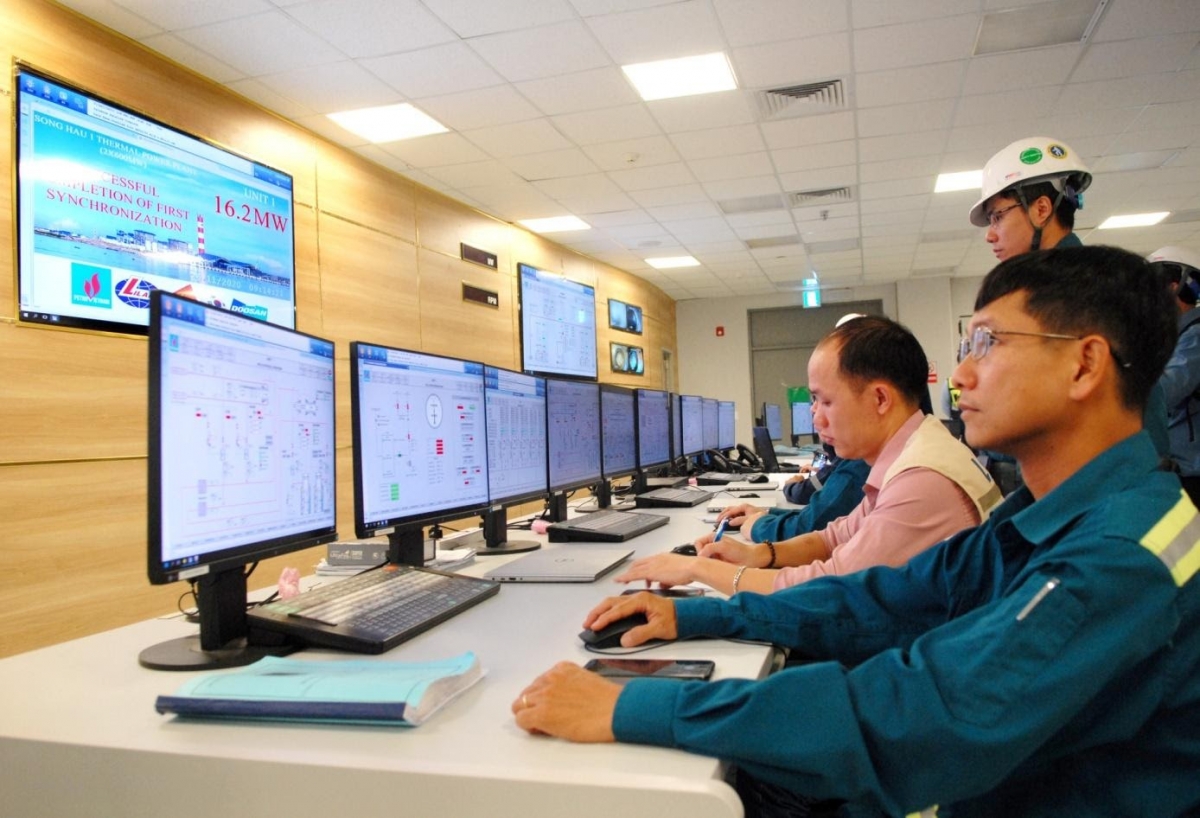 The Song Hau 1 TPPP synchronization into the National Electric Grid

As before, the Song Hau 1 Unit 1 & 2 synchronization into the National Electric Grid had been celebrated successfully on November 26th,2020 and January 27th,2021 respectively, which marked Lilama’s efforts to overcome dificulties and entanglements to fulfill the project construction on schedule.

After the successes in projects of the Ca Mau 1&2, Nhon Trach 1 & 2 and Vung Ang 1 as the role of EPC Contractor, LILAMA has once again affirmed the strong capabilities in power projects domestically and overseas through the fulfillment of the Song Hau 1 synchronization in terms of requirements on quality, safety and schedule.

Under the Government’s direction at the Resolution No.69/NQ-CP dated September 13th, the Song Hau 1 Unit 1 and Unit 2 shall be put into commercial operations in respectively the second and third quarters of 2021.

Therefore, to fulfill the next important milestones, LILAMA and performing contractors also wished to receive further considerations from the PetroVietnam Leaders’s support for solving difficulties in settlement in the Song Hau 1 project, at the same time to request the Owner to propose and submit the Government to approve a special mechanism application which allow the equipment suppliers to come in Vietnam in service for the commissioning in site. 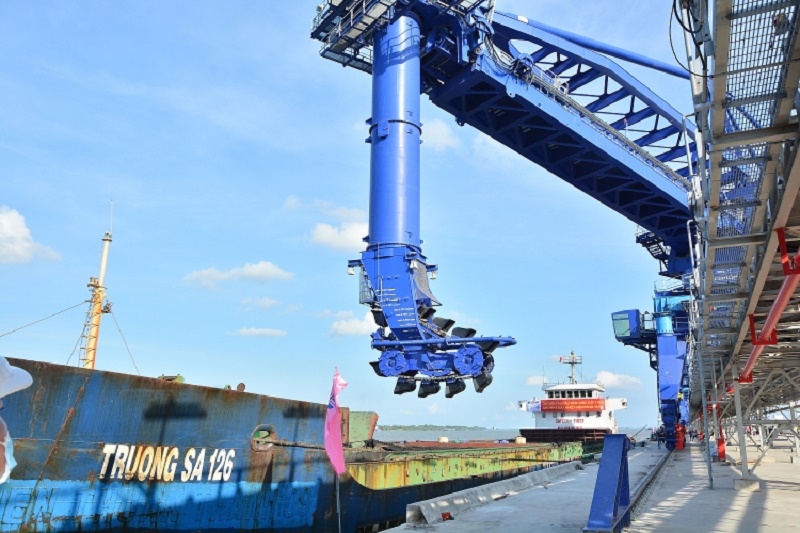 The 1,200MW Song Hau 1 plant belongs to the National General Plan of Song Hau Power Center that PetroVietnam is the Owner and LILAMA Corporation the EPC contractor. When putting into operation, the plant shall provide the national electric network with a production of about kWh 7.8 billion per year, making a significant contribution to the national energy security and the economic development for the Mekong River Delta in general and Hau Giang province in particular.

Another national project needed to mention herein is the Long Son Petro-Chemical Refinery Plant located in Ba Ria-Vung Tau province that has been also executed with great efforts of performing units in site. This is a massive-scale project with high requirements on constructing techniques, through which the Vietnamese professional engineers and killed workers would be certified.

Being considered as one the most important large projects in Vietnam, Long Son Pro-Chemical Refinery Plant Project with the total investment of over USD 5 billion was stepping into the stage of accelerating in execution targeting to the commercial operation by the end of 2022. 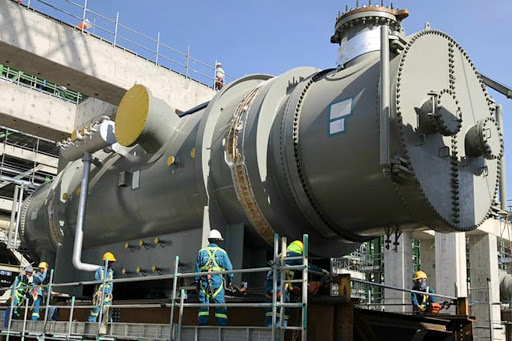 Unlike other mega projects managed by one EPC contractor only, the Long Son is shared by five EPC contractors who are responsible for five different divisions. Therefore, the co-ordination among them shall become a top concern for items synchronization in site.

Joining three in the total five packages, LILAMA has mobilized resources in large quantity such as 1,200 including engineers and workers, and advanced equipment and vehicles. According to Mr. Le Hai Long – Manager of LILAMA Long Son PMB, the installation works that LILAMA took over included the steel structures, pipes and piping components, electrical equipment, insulation, precast concrete, cable trunking…

In order to secure the synchronization of execution and avoid overlapping among contractors under the circumstance of dealing with three EPC contractors in a same time, all items as well as schedule for milestones had to be planned in detail; measures for the site performing must be various and suitable to each item; and it was necessary to settle timely all matters arisen during the process. So far, Lilama has fulfilled schedule as required.

The Long Son Package G had been commenced since the beginning of 2020 and the installation work for the pipes and electric cables currently has been at peak construction. Basically, the schedule required by the EPC Contractor were all met, in which about 65 percent the completed work volume in the total of the plan was gained. In this year, the pipe and electrical equipment shall be focused until finishing and the whole package completion should be expected to achieve by September, 2021.

The construction of Long Son Package A1 works had been mostly deployed by Lilama. At present, the precast concretes structures and scaffoldings had been fully fabricated. However, the ground clearance as well as steel structures and equipment supplying covered by the PA1 EPC Contractor were continuously delayed for about two and a half months compared with the schedule leading to slowing down the pipeline erection. The performance quantity was only reached 35% the total volume and the remaining shall be concentrated to implement in 2021.

Mr Long shared that the Long Son Package B schedule was still facing difficulties and unable to be boosted because of the above reason. LILAMA was also ready for working overtime, further mobilizing labour resource, closely coordinating with other EPC Contractors and relating performing units, committing the quality of each work item in targeting to complete the project on time.

The Nam Con Son 2 Gas Pipeline Project is an important national work in the development and synchronization for the gas industry infrastructure in Vietnam, which has advanced the final stages of completion.

The Nam Con Son 2 Gas Pipeline project belongs to the second phase of “the General Plan for development of Vietnamese Gas Industry in the period of time till the year 2025 and toward 2035”. The first phase of the Project had been completed and put into operation from 2015 with 151km-long pipeline received gas from the fields of Nam Con Son 2 Basin to onshore station and supplied the Southern Vietnam. The second phase was further developed with the installation of 118km-long pipeline offshore and nearly 40km-long onshore. 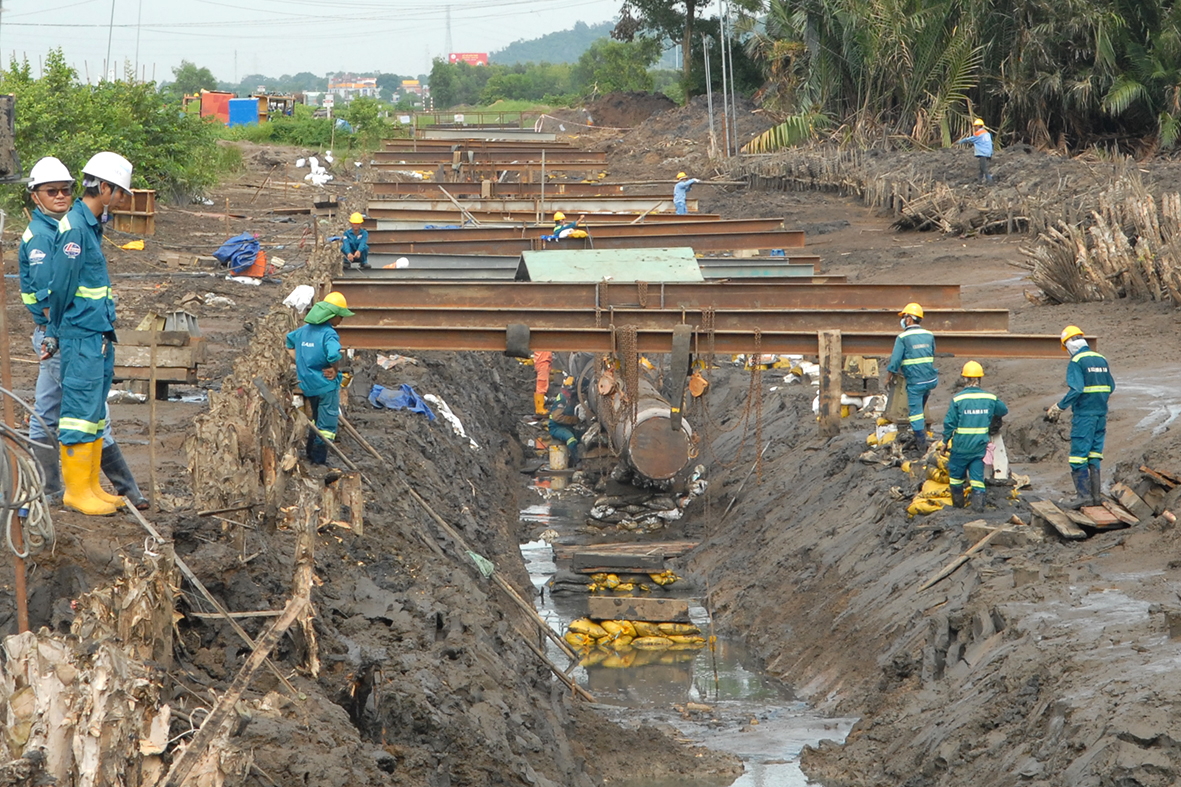 Performing the Nam Con Son 2 onshore gas pipeline, so far LILAMA Corporation had deployed and mainly completed the installation work with great efforts as fast as they could which was put into commercial operation. Mr. Nguyen Duc Hau – Deputy Manager of LILAMA Nam Con Son 2 GP PMB said: “The onshore pipeline is divided into two sections including the 26 inch-diameter section of 10km-long pipeline from Long Hai platform (in Ba Ria – Vung Tau province) to Dinh Co GPP (gas processing plant), and the 30 inch-diameter one of 29km-long pipeline from Dinh Co GPP to Phu My GDC (gas distribution center). From June to December, 2020, the pipeline had been completed and operated stably after 6-month construction. The remaining works that Lilama presently needed fulfilling are land restitution and some items finalization”.

Because the onshore pipeline was executed in the raining season the Southern Vietnam, it faced difficulties in both weather and geological conditions. According to Mr. Hau, the phase 2’s pipeline passed through different types of lands with complicated terrains such as the human-living area, swamps and usual wetlands, while going parallel with the two existing ones, the requirements on safety and carefulness in execution were highly attached. Besides, the existence of land formed with hard-rock ground also affected the process as it extended the time by 03 months to complete only a 200-metres long pipeline segment. Mr. Le Van Bao – a LILAMA engineer for technical supervision said that, we had to use a rudimentary way to drill and break this hard-rock land with an aim of protecting the existing pipelines from harm or danger. He also added: “In some positions, there was ground water arteries spraying up into flows so fast and thickly that we must keep pumping water out of the section and constructing simultaneously; or forcing to dig down deeply to thread a segment of pipeline beneath the existing one due to the space-limited site ground”.

In the high time of the project, Lilama engineers and workers had to work from 6h in the morning till 22h in the evening per day. As the result, the Nam Con Son 2 onshore pipeline completed on schedule would be a great effort by Lilama which shall satisfy the higher and higher demand of gas supply and processing shall meet in the whole country.